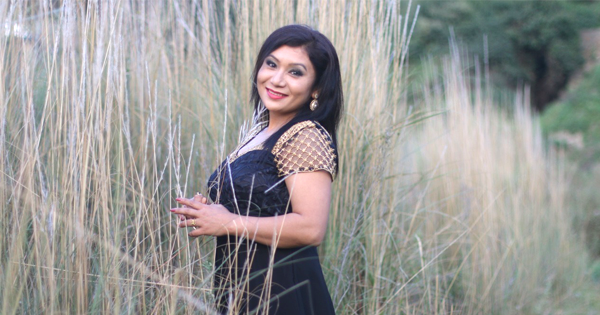 Today in our spotlight, we have a very talented Prashna Shakya, the first born child of Binod Shakya and Sumitra Shakya. She was born on the 26th of April in Dharan, Sunsari. She spent her childhood with her grandparents and completed her schooling over there. Her father being a sportsman and a coach, wanted Prashna to pursue sports. However, Prashna had always been interested in music ever since an early age and was determined to pursue her passion in music.

Prashna joined Do Re Mi and Gandharva Kala Kendra to improve her knowledge in music. She was trained by many renowned artists and professionals in the local music scene such as Divya Khaling, Ratna Bhadur Khadgi, Chandan Shrestha, Gurudev Kamat, Bijay Singh Munal, Bal Mukunda Banepali, Anushree Banerjee and Sandesh Shrestha. She used to perform at gumbas, talent shows and the Chimayki Sajh conducted every year alongside national singers in Dharan. Chimeki saajh was the first show that explore her talent. She got basic music knowledge from Bal Mukunda Banepali the one who guides her to Radio Nepal and made a big support in her musical career in Dharan. She became more proficient in her own skills after the help of the Music Media Studio. “The Music Media studio was one of most the supportive places which helped explore my talent.” as said by Prashna. She loves listening to songs of  Narayan Gopal, Aruna Lama, Gulam Ali, Shreya Ghoshal, Tara Thapa, Bhakta Raj Acharya, Deep Shrestha, Satya Swaroop, Anju Panta, and Juna Prasai.

She competed in a singing competition organized by Radio Nepal and was amongst top ten participants which helped her gain some popularity within the local music scene. She also participated in the talent show “Timro Sur Mero Geet” and successfully won the talent show with ease, which helped her music career immensely. She was also awarded the titles of “Best Vocal Performance Female” in Hits Fm (Awaaj deu), “Best Vocal Female Pop” in Kalika Fm (Aakhama aaera (Baby I luv u)), “Best Vocal Female Pop” in the Arena Music Video Awards (Shiraima Shirbandi) and “Best Vocal Female” in Music Video Awards Dubai (Ma ta sojhi sojhi). She has done Nepali and Indian jingle and voice over in many Advertisements which became a huge success. She has worked as an RJ in Image Fm for 6 years.

Having gained some popularity amongst artists within the Nepali Music scene, Prashna received lots of encouragement and support from fellow artists. Deep Shrestha, Prakash Gurung and Divya Khaling motivated and guided her immensely.  Maharaj Thapa is the composer and lyricist of the album “Awaaz” and the track “Awaj Deu” which became a very successful track and Prashna considers him as a godfather. The third album “Udayan” released by Prashna helped her to get in touch with her creative side and released successful tracks which later on would go on to become hits. Some of her popular songs are “Awaj Deu”, “Gaule Jeevan” with NSK, “Lasha ko Chiso “, “Badal Barsha”,  “Pal Pal”,  “Oilayako ful lai”, “Akkama Ayara (Baby I love you)”, ,”Jamarama Jau”, “Ekkasi Kohi”,”Mutu Na chirideu”, “Binti”, “Siraima Sirbandi”, “Ma ta Sojhi” .

She says, “During my starting days in music, I had to struggle a lot and it was very difficult for me but the continuous support and blessings from my family, friends, and supporters made me face all the difficulties”. She expressed blissfully that, “Today I find lots of talented singers emerging within the Nepali music industry and some have gained fame worldwide. Hard work, determination and honesty with a little bit of hope will surely lead to great success.”