There are some of the most beautiful and famous treks in Nepal.
1. The Langtang Region
A trek through the Langtang region will take you to 4,700 meters (15,419 feet) with excellent views of both the Annapurna region to the west and the Makalu region to the east. The trek also passes by Buddhist monasteries and a nature reserve renowned for animal viewing.
The best thing about the 14-day trek is that it begins near, or even in Kathmandu. This makes it very easy to organize and is an excellent option for those pressed for time or looking for an easy introduction to trekking in Nepal.

2. The Mt. Everest Circuit
Nestled in the Khumbu region, home to Sherpa and Tibetan Buddhist cultures, there are many reasons to visit this area of Nepal besides getting a glimpse of Chomolungma, as Everest is known to the people who live around her.
Treks in the Khumbu typically range from 17 to 25 days, depending on the route. Though it was once popular to begin treks into the Khumbu from just outside Kathmandu, heavy Maoist activity in these areas has forced most trekkers to fly to Lukla, which sits at 2,680 meters (9,380 feet).

3. The Annapurna Circuit
The major trek in the west of Nepal is the Annapurna circuit. Reaching a height of 5,300 meters (17,388 feet), the circuit traverses the incredible mountains and glaciers of the Annapurna Conservation Area.
The circuit takes between 16 and 20 days from Pokhara, Nepal’s third largest city. Though the elevations are just as high as in Khumbu, the Annapurna Circuit begins near sea level and allows more time for gentle acclimatization. 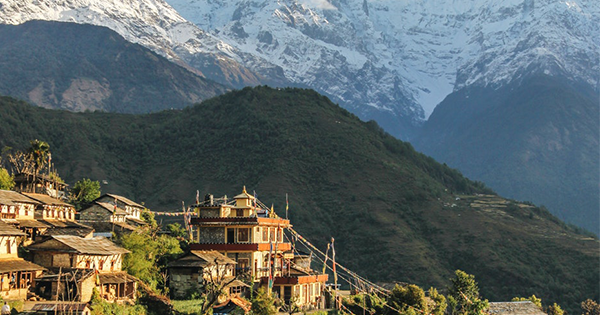